A WASHING MACHINE that once lived in a household felt his efforts went unappreciated compared to the other appliances, as the housewife only used it at night so as to save money on the electric bill. "It's unfair that the toaster and the vacuum cleaner work in the morning, whereas I get to lose my sleep so that she keeps her clothes clean", he used to say. 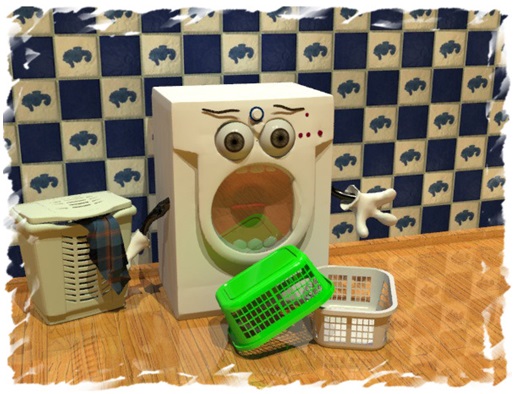 So, one day, he took the brave decision to make the clothes dirty. "If she really wants clean clothes, she'd best switch me on in the mornings", he whispered to himself, avoiding to tell anyone his plan. The boiler overheard the whisper, however, and told him: "you should be thankful you have a job". Yet, the washing machine decided not to back off anyway.

The same night, the housewife appeared, carrying a laundry basket filled with unwashed clothes which she put in the washing machine. He, then, put forth his big plan: instead of cleaning them, he made them as dirty as possible. As a result, when the housewife opened the machine's door only a couple of hours later, a terrible smell came out. She then stared at the dirty clothes with amazement, unable to believe her own eyes, as she was already too tired and her eyelids were closing. Looking at them more closely, she observed that the stains had gotten worse than before.

"Could it be that I’m too tired to see clearly?", she wondered as she took the dirty clothes out and placed the whites in their place. Again, the next time she opened the door, the clothes came out darker and dirtier than ever before.

She, then, blamed it on the cheap cleaning fluid she was using. As she was drowsy, however, she went straight to sleep, leaving the chore for another time. The next morning, she went to the nearest store and bought a brand new, expensive detergent that would surely make her clothes look shinier than ever before. Yet, even this time, the washing machine punished her by making the clothes even dirtier.

The same thing happened over and over, each and every night, and the housewife always blamed it on her sleepiness. When the other appliances realized what was going on, they found a nickname for the rebellious washing machine, labelling it the 'anti-washing machine'. Yet, the housewife still had her doubts, until a week later, she began to wonder: "Could it be that the washing machine is broken?". The appliances burst into laughter as soon as they heard it.

The very next day, she switched the machine on in the morning, so she could see things better under daylight. Proud that his plan had finally worked, the washing machine did his best: the whites were whiter than ever before, and the brights brighter than the sun. Not a single stain was to be found, and the housewife was so impressed that she laughed at herself: "looks like the nightshift took its toll on my vision".

"You should have called it a day much earlier", the washing machine laughed quietly, after having persuaded her that it was her drowsiness to blame, and the appliances burst into laughter with her lesson.