Philosophy and the blender

A BLENDER once really loved Philosophy. He used to sit all by himself and read huge tomes with the names of the greatest Philosophers of all time written on their covers, never to put them aside despite the fact that he was often confused by their content. Knowing little about the subject, the other appliances of the household found it hard to understand how he spent so much time reading books all by himself. 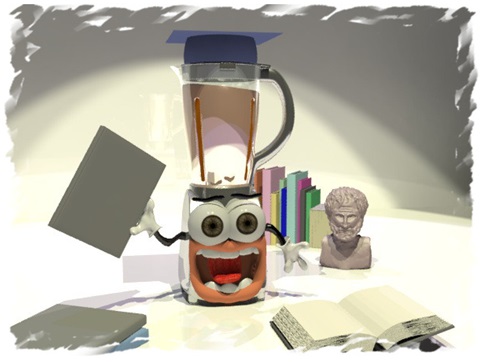 "Why don't you share a piece of the wisdom you’re acquired with us?", the lamp, who also loved reading books, asked him one day. The other appliances gathered around them to hear him lecture. "Tell us a great truth about life!", they demanded.

"The simplest and most clear truth about life is seldom clear and never simple, the Philosophers say", the blender replied bluntly, and the appliances were rather troubled to hear his words, as they didn't quite get what he meant.

"Well, tell us a good reason to learn Philosophy then", the steam iron, who was used to ironing the clothes in exactly the same manner each day, asked him. "What is difficult is not to learn, but rather to unlearn what you already know", the blender told him, and the appliances were shocked to hear it.

Then they asked him: "Well, at least tell us something about the books you read".

"If you have a garden and a bookcase, you have all you need in life", the blender replied. He, then, pointed out of the window to the garden in which he used to take long walks, contemplating on the books he had read. This time the answer was more to their satisfaction, as they also enjoyed walking in the garden and breathing fresh air.

"Why bother with Philosophy when we have other Sciences?", the telescope, who spent his nights gazing at the stars, asked him. "Because Science is for what we know. Philosophy is for what we can't know", the blender replied and the appliances burst into applause.

"You are indeed wise, a true Philosopher!", they told him with one voice, as there was not a single question to which he did not have a proper answer. "Teach us how to do the same", they demanded and suggested he set up a class and become their teacher.

"I can teach you nothing, except how to wonder", the blender replied. He then took his book and went outside to breathe fresh air and observe nature's beauty, just as he always did without telling anyone.

Many days later, and after the other appliances decided to do the same, they realized that true wisdom lies not with teachers and books, but rather in nature itself, which the blender so meticulously kept studying through his books.