The pen who wanted to be a writer

A pen that once lived in a classroom really loved literature. She used to read all sorts of books, but most of all, she loved novels, which were very lengthy in number of pages and could fit extremely complex stories within them. So she wished that she would one day become a writer herself, filling her mind with great ideas every time she read a new book. 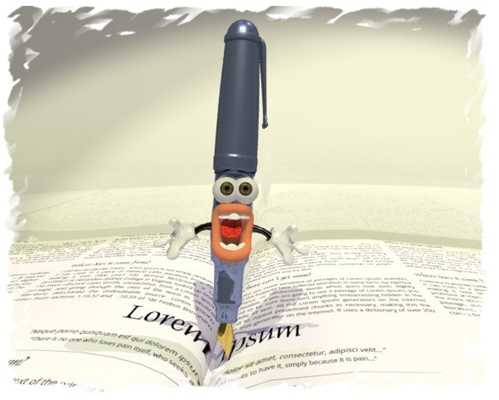 One day, she thought of making her dream a reality. "I'm become an author!", she announced full on enthusiasm to the other school supplies. Yet they found it rather strange to hear it, as despite her interest in books she had never found the courage to read them something she had written herself by that day.

The pen lost no time: she headed to the nearest bookstore and bought packs of white paper, which she carried all the way to her desk. Then she grabbed the first piece of paper and started writing. As soon as she finished the first paragraph, however, she felt troubled.

"What should I write next?", the pen wondered and started thinking of ways to continue her story. With every new phrase she added, however, she felt her inspiration going away. So she kept writing and erasing words so as to write something else in their place, never to decide on something.

At some point, she decided her writing was not progressing. "Maybe it's not my day...", she thought and went to the nearest window to get some fresh air. An owl then approached her, who was nested in the branches of a tree nearby, and the pen thought of asking her for advice.

"My dear owl, I have more than a thousand stories in my mind, yet every time I sit down to write something on paper, I feel blocked", she told her.

"If you truly want to be a writer, you need to dip into your words and let them draw you in, like the gushing waters of a river that sweep everything away in their pass", the owl told her.

"But I don't know how to swim!", the pen replied, not really understanding what she meant. The owl, however, flew away, leaving her to contemplate her words alone.

As soon as our good pen returned to her desk, she started writing again. After a while, and seeing she had the same problem and couldn't build on her story, this time she thought of reading everything she had read until that point. And so, as she was reading through the words one by one, she felt them drawing in, as if inviting her to dip into the story.

"Now I understand what the owl meant!", the pen exclaimed and then she kept writing the way the words she had already written led her. And then she kept adding, and adding more of them, until the words had formed a stream that led her story exactly where she were supposed to lead it. And so the time passed and she felt so drawn in by what she writing that she had not realized it was already midnight and she had to go to sleep.

Months later, and after spending specific hours each and every day so as to not leave her other hobbies aside, she managed to finish her first book. The other school supplies burst into applause when she presented it in front of them, and asked them signed copies so they would have a reminder when she became famous.

Rumor has it that when our good pen grew up she became a very renowned author, whose novels became bestsellers all over the world.