Elevenses and the forgetful schoolbag

A schoolbag once had a very short memory. As a result, whenever she had to bring stuff to the classroom, she would always forget half of them at home. The only thing she would not forget however, was her brunch, which she always prepared with much patience and diligence. "How come you never forget your snack?", the other school supplies poked fun at her, yet she kept constantly forgetting notebooks, pencils and books, only to bring them at random. 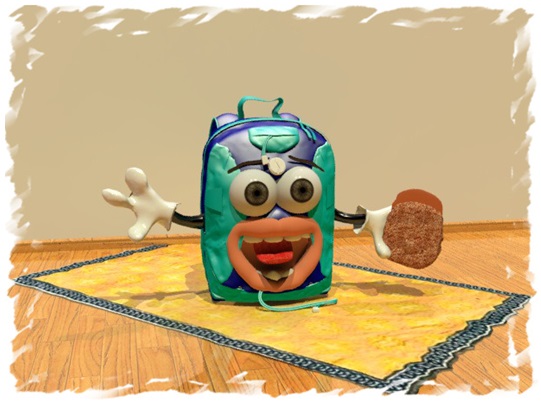 So one day, the school supplies with the ruler as their leader thought of putting her in trial. They asked her to bring all her stuff to school and lock them there, so that if she ever forgot something, she would immediately find it. The schoolbag agreed, however, only to bring half of her belongings the next day and forgetting the other half at home.

"It's ok, we'll lock these up...", the ruler said and placed them in the drawer under her desk. "Bring the rest of them tomorrow", he demanded.

Yet the second day, the schoolbag again brought exactly half of what she had left home. "Today it seems you brought half of yesterday's half, which is... a quarter!", the ruler told her and locked whatever she had brought in the drawer. The other school supplies burst into laughter just to hear it.

And so in the third day, the schoolbag brought again half of what was left home. Same for the day after that. Each and every day, she would bring half of what was left. Until eventually most of the stuff was locked in her drawer, and when she finally showed up only carrying a single notebook, the ruler assumed there was only one object left home.

"Since today she only brought one notebook, it means tomorrow she will bring the last object!", he announced to the other school supplies, who started cheering and placing bets on what the final object was: another notebook, a pencil or a rubber?

The next day, however, the schoolbag was late to show up. As time was passing  the school supplies became curious and starting making up stories about what had happened. When she eventually appeared, she told them: "I almost forgot my snack. Halfway through I remembered it and returned home to get it."

"Is there perhaps something else you forgot today?", the ruler asked her, filled with curiosity. "Now that you mention it... a notebook..", the schoolbag admitted and went red with shame as she took a bite of her snack. The other school supplies burst into laughter to hear it.

And so, the final notebook remained at home forever, as each day the schoolbag had two things to think about: the notebook, and her snack, which she anyways never forgot.