THERE WAS ONCE A LIME who thought of himself to be better than the yellow lemons in the grocery store. "My green color is a sign of my noble lineage", he used to say and look down on the other fruit and vegetables. They couldn't care less, thinking of him to be rather sniffy. 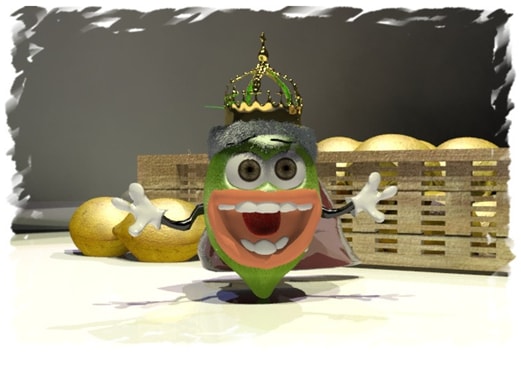 So one day, he thought of proving his superiority to others by dressing up as a king. He went to the nearest toy store and bought a golden crown, which he put on his head and starting walking around the garden so as to be noticed.

"You are no king, as you don't have gray hair", told him a yellow lemon and pointed at his black hair below the crown. The lime lost his color as soon as he heard it, but agreed. "He's right...", he whispered, then went straight back to the toy store.

After looking around, he found a gray wig which was left from the carnival. He put it on, went back to the garden and again walked around to be noticed by the fruit and vegetables.

"You are not a king, as you are not wearing a red tunic", told him another lemon. The lime then again murmured: "He's right; all kings wear red tunics. How could I have missed that detail?". And with those words went straight back to the toy store and bought a red carnival cape.

"Now they will surely know I am their king!", he said and wearing the crown, the wig and tunic went straight back to the garden. He then stood up on a podium to give a speech.

"You will surely recognize your King by his golden crown, his gray hair and his red tunic!", he boasted with pride in front of the other fruit and vegetables.

"And from the green of his jealousy!", shouted the yellow lemons standing below the podium, then burst into laughter. The conceited lime however was so ashamed that he turned red.

"Red also looks good on you, your Majesty!", shouted everybody, seeing he had changed color from shame. He then took off the cape, the wig and the crown in anger, threw them away and ran as fast as he could. As soon as they found out they were carnival items, they laughed with all their heart.

As for the lime? He realized that when you think of yourself above others, they think of you as the laughing stock rather than their King....