The parsnip that loved mouse pastries

A PARSNIP once in a grocery store loved pastries from the nearby patisserie. “Let’s start with… dessert!”, he would suggest to the other fruit and vegetables every time they would sit together for lunch, then go straight to the refrigerator to bring the pastries before they had even finished their first plate. He would eat them all straight away before somebody had a chance to lay their hands on them. 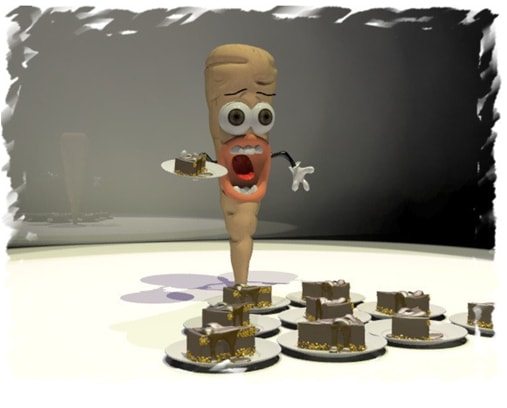 “You need to show more character… it’s not nice to go straight to the dessert and leave us all behind!”, the strawberry told him one day, who also loved chocolate but tried to show restraint. She then reminded him of his cousin, the carrot, who always followed a healthy diet and knew how to resist temptations.

“How could I possibly resist when we have a box full of MOUSE pastries in the fridge!”, said the parsnip to the other fruit and vegetables, then ran to the fridge before they had finished their plate. He then came back carrying a box full of delicious pastries, each shaped as a cute mouse, and devoured them in front of everybody.

“We have to do something about the parsnip”, said the celery, who always ate little and avoided sweets and fats. To teach him a lesson then, they came up with the following plan: they bought a box from the pastry shop, emptied it from the mouse pastries that he really loved, and put mechanical mice of the same size which they had bought from a local toy store in their place.

When the time came to sit together with the parsnip once again, they asked him to go straight to the dessert. “Let’s start with the pastries today. Would you like to bring the box then? But please, don’t open it before you let it on the table in front of us”, they told him.

“Agreed!”, replied the parsnip full of enthusiasm and ran straight to the kitchen. Such was his joy however, that he opened the box straight away after opening the fridge door, disobeying the other fruit and vegetables. The kitchen was soon full of toy mice that jumped straight out of the box and ran from one corner to the other.

Our good parsnip became so scared that he hopped on the kitchen table to save himself. “Run for your lives, the kitchen is full of mice!”, he shouted at the other fruit and vegetables, mistaking the toy mice for real ones.

“So you got your lesson, to wait until the time comes for dessert!”, shouted the strawberry as she entered the kitchen. Then each and every fruit and vegetable entering the kitchen burst into laughter as soon as the saw the parsnip hiding from the toy mice. After a while, their batteries died and they stopped moving around, proving to him that they were indeed toys that were not to be feared.

From that day he learned the lesson, never to lay a hand on the dessert before the time for it comes....