Graph paper and the ruler

A ruler that once lived in a classroom wanted to always have the dimensions of the objects around him measured with as much precision as possible. He would pass countless hours counting again and again the same items that he found in his path, until he was certain he had measured them correctly. The other school supplies found his habit irritating, as on one hand he never let anything slip his attention, and on the other he was never to finish. 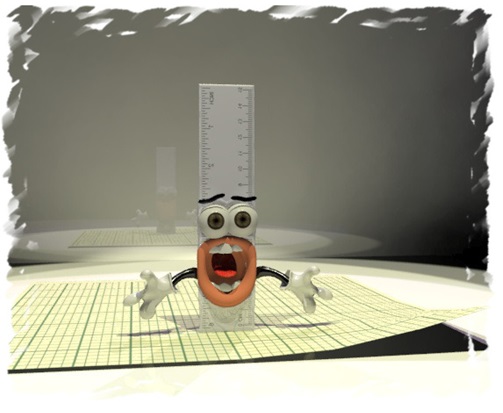 Things got really out of hand when one day the school supplies had to move the furniture of the classroom around. “A little more to the left…! No, to the right by one millimeter…!”, the ruler ordered them, giving them directions so precise that they couldn’t possibly follow. And so that day they all went to sleep without even putting one desk into position.

“Something must be done about the ruler”, the rubber told them strictly just before they shut the lights to sleep. “If he keeps giving us directions, we’ll never finish”, she added and the other school supplies agreed with her. So they all started contemplating on ways to spare themselves from his directions.

“What I told you there was a way to automatically have the distance between the desks shown on the floor?”, the pencil, who loved geometry, asked them with excitement. None of the school supplies realized what he was talking about. He then explained that just a couple of days ago when he had visited a bookstore, he came upon a very special paper on which many squares of equal size where drawn, one next to the other, so they wouldn’t have to measure anything themselves. “It’s called ‘graph paper’”, the pencil told them and the school supplies got excited to hear about it.

“We brought you a new carpet”, they told the ruler the next day they met to put the desks in place, and unrolled a huge piece of graph paper, enough to cover the classroom’s floor. He got very impressed to see it, as the paper contained so many small squares that one could draw straight shapes on it without consulting him.

“Are you sure the squares on the carpet are equal?”, the ruler asked them, then started counting each and every one of them just to make sure. It took him so many hours that in the meantime the other school supplies managed to put everything in place with unbelievable exactitude: from desks and chairs, to closets and blackboards, using the squares of the graph paper to guide them in keeping the correct distances. After finishing everything, they got out to breathe fresh air and get some rest.

“I quit!”, the ruler, who was left behind in the classroom to examine the graph paper’s square dimensions, exclaimed at some point. He then got out and admitted in front of the other school supplies that he had gone too far with measuring each and every millimeter, to the point that he would never finish.

“Maybe the time for my retirement has come…”, the ruler told them, thinking that since they used the graph paper, no one needed him any longer.

“Not so long I have need of your skills!”, the geometry loving pencil told him, who need the ruler in order to draw straight lines, and from that day on, they became inseparable friends.