The pumpkin that scared no-one

THERE WAS ONCE A PUMPKIN that always had little luck in scaring the fruit and vegetables of the garden, although she tried really hard. She would hide behind trees or big stones, and wait until some unsuspected fruit or vegetable would pass by. She would then jump out of her hideout and use her high voice to make a loud “Boo!” noise that caused the other fruit and vegetables to burst into laughter rather than scare them.

“What is going on here? I have no talent… nobody’s scared of me”, she thought and went sour. “… I am a failure of a pumpkin”.

So one day, she thought of asking the lion, whom everyone feared. She left the garden without saying a word, and walked to the nearest forest, which was filled with birds and animals that were all scared of their ferocious king.

“Greetings King Lion. Everybody’s scared of you. I, however, seem to have a really hard time scaring others. Could you perhaps let me know if there’s something wrong about me?”

The angry lion then came closer to her, and after unleashing a huge roar, replied: “Everybody’s afraid of me for my sharp teeth and claws, with which I can tear even an elephant apart. But why would they be afraid of you, my sweet little pumpkin?”

The pumpkin got so scared to hear it that she ran as fast as she could. As she was running, she stole glances behind just to make sure the lion was not following her, only to realize that her king had burst into laughter at the sight of her take off. As soon as he distanced herself enough, she thought: “It’s true that the lion has sharp teeth and claws, and an aristocratic mane, but what scared me most was its loud voice. My voice on the contrary is soft and high, and as soon as I go ‘Boo!’ on others, they laugh at me”.

So she thought of a trick to make them scared. When she reached the garden, she wore false, sharp teeth, as well as a wig, like those worn by scarecrows. She then put on a pointed hat and grabbed a broom. She waited for it to get dark and watched patiently as the fruit and vegetables of the garden gathered around the campfire to feel its warmth and share stories. She then went forth, not saying a single word. So scared were the other fruit and vegetables of the sight that took little notice of their good friend, the pumpkin, hiding behind her black witch hat, and hid behind trees and bushes. Only a few courageous spinaches plucked up the courage to come out and ask with a trembling voice: “Who are you?” 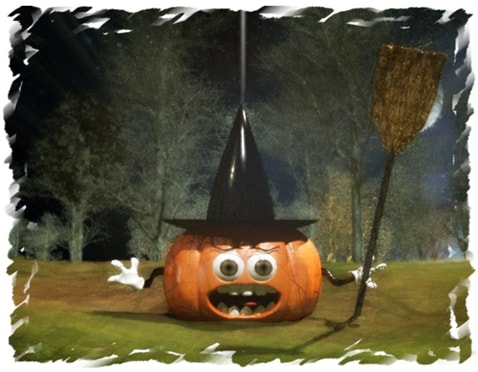 With her sweet voice then, the pumpkin made a loud “Boo!” and burst into laughter. The other fruit and vegetables were so relieved to recognize her that they, too, started laughing and “Boo!”-ing each other playfully.

They then learned their lesson, never to make fun of the pumpkin for her sweet, high voice. Years later, they found out that their good friend had become a Halloween star.