Myths from the Northern Countries - MoonFlake.com

THERE WAS ONCE A SQUIRE who was very obedient and loyal to his master. The squire looked after his master's horses with great care, and always made sure to count them before letting a horse out of the stables. But the King's horse, which was white as the snow, he tended to with even greater care, as the horse was very gracious. One day he entered the stable, however, and was shocked to see that someone had stolen it. 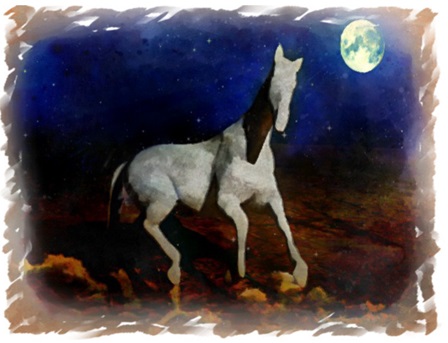 "They will hang me if they find out", the Squire thought, so he left the stables to find the horse and bring it back. As the ground was still wet, the horse's footprints could still be seen, and the squire followed them to the forest nearby. On one hand he carried the sword, and with the other a lamp so as see.

A few hours later he encountered a clearing deep in the forest were two small and ugly goblins sat on a tree trunk. As soon as he saw them, he reached for his sword, but soon he realized there posed no threat: the goblins were very young in age, and they were also hungry. He then put his sword back in its case and approached them, giving them water to drink as well as some bread and butter that he had taken for himself for his snack. What a disgusting sight they were: they ate the butter so greedily that it was spread all over their face.

Heavy footsteps were then heard from the bushes nearby and a voice that addressed the Squire: "since you took pity of my children and treated them with kindness, you no longer need to search for the white horse. I'll bring it back to the stable myself". The Squire was delighted to hear it and headed straight for the stables, where he found a dark hooded figure riding the horse with the face fully covered.

After dismounting, the figure bowed graciously before him and left for the forest without saying a word.