How the first Igloo was built

MANY YEARS AGO, long before humans had even set their foot on the frozen far edges of the earth, there lived an Indian prince who was looking for shelter. That prince happened to get lost from his tribe when he was still young and kept wandering in the desert, unable to find his relatives. 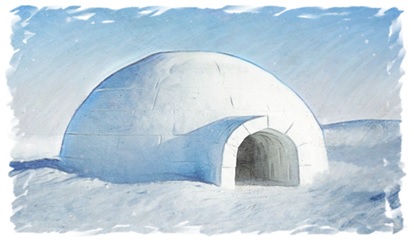 Wherever he went, and regardless of the tribe he met, no one accepted him as they considered him a foreigner. Disappointed that relatives were nowhere to be found, he decided to keep on wandering all alone by himself. One day, the wild wind started blowing on his face.

He tried to resist being carried away, however the wind soon became so strong that whole trees were uprooted. He then thought of letting the wind carry him along. He walked in the direction of the wind for miles and miles, until there was snow to be found. Eventually he found himself in a country so cold and frozen that only mountains of ice could be seen on the horizon. The wind, however, wouldn't leave him alone not even for a moment.

"How can I find a place to call home in this desolate place?", asked the prince, who was trembling from the cold. He then looked around and discovered that was not a single tent to be found, not even a tree hollow to hide; only white snow that the wind blew on his face.

Then he thought of compressing the snow with his hands and forming into bricks, with which to build a home for himself. So as to spare himself from the blizzard, he gave it the shape of a sphere, so that the wind would go in but not come out of it.

As soon as he finished it, he got inside it to find shelter, blocking the entry with a brick made of snow.  The wind that was trapped inside the building whirled around him in circles, until in the end, the two of them, the wind and the prince, became good friends, warming each other the cold nights. His new home even proved so warm that the prince's descendants decided to build their homes exactly like that.