The craftsman of the great volcano

A BLACKSMITH that once lived in Ancient Greece was so talented that even the Gods had heard of his skills. So big was his fame that warriors from all over the world came to visit him and buy the finest weapons from him. No matter his talents, however, the man was also very arrogant and would never miss a chance to boast about his skills. 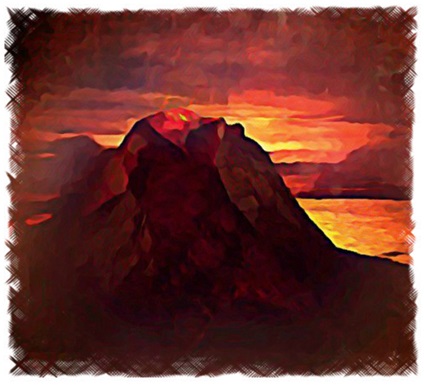 Hephaestus himself, the great God of Metallurgy, learned about him and paid him a visit one day to ask him to make a sword so fine that he could in turn present it to Zeus as a gift. In return, he would have the God's favor, as well as the chance to try his skills in Hephaestus' workshop beneath Mount Aetna in Sicily. The one and only condition, however, was that Hephaestus would present the sword to Zeus as his own creation.

The blacksmith agreed and so Hephaestus granted him access to his workshop. He worked day and night, nonstop. Hephaestus even gave him helpers and slaves, as well as access to any material he might need so that he would deliver on time. Occasionally, the God himself would pay him a visit to track his progress. The craftsman worked hard and, in the end, managed to deliver a sword that was a marvel to look at: the gold it was made of shone in all its magnificence when hit by sunlight, the hilt was decorated with elaborate lions, and on the blade itself scenes from Zeus' birth were embossed.

Hephaestus was so amazed by his sword that he thought of bringing the blacksmith in front of Zeus to honor him. So, it happened. They both appeared in front of the King of the Gods, and Hephaestus handed him over the precious blade as a gift. Zeus was so amazed at the sight that he started asking questions.

Unable to hold his pride for his feat, the blacksmith announced that the marvelous gift was his own creation, breaking their deal with Hephaestus. Zeus praised him the very moment, but as soon as he understood what was really going on, he demanded both of them leave his sight.

Hephaestus was so enraged that to punish the blacksmith, he locked him up in his workshop in the depths of Aetna, where he works day and night without ever getting the slightest praise for his creations.

Many who travel to Aetna even to this day can see smoke and fire coming out from the mountain to this day, as coming from the workshop, that never runs out of business, terrible sounds that echo to the ends of the earth can be heard.