IT IS A WELL-KNOWN STORY, how during the Persian Wars, the King of the city of Carye in southern Peloponnese chose to ally with the Persians instead of the Greeks. As soon as the war was over, the King atoned for his treason by dedicating his six beautiful daughters to the service of the great Goddess Athena. The citizens of Athens accepted his sacrifice, and decided that they should stay in the Erechtheion, near the Parthenon, in the Acropolis. For this they called them 'Caryatids', as they came from Carye. 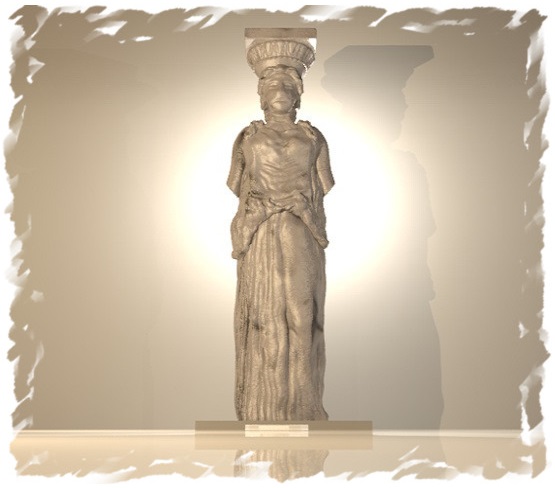 The King went over to the Acropolis and with tears in his eyes fare welled his daughters, giving a strict warning to the oldest of them to watch after her sisters, especially the youngest one. The daughters then took a vow of silence and devoted to the service of Athena, who in turn made them immortal.

And so, the daughters lived together for ages, silently watching as the Parthenon and the rest of the Acropolis became ruins, was consumed by fire or pillaged by the various conquerors who set their foot on the hill. Remaining truthful to the vow they had given, they didn't utter a word not even when the Venetians blew up the sacred temple or when the Turkish governor converted their home, the Erechtheion, into a harem.

Many centuries later a Scottish nobleman, Lord Elgin, happened to visit the Acropolis with the sole aim of taking ancient works of art back to his home country and his personal collection. So enchanted was he by the beauty of the Caryatids that he wanted to take them with him. When the youngest of them tried to resist, a British soldier accidentally shot her, wounding her mortally. The eldest sister then, to honor the promise she had given her father, broke her silence and asked Lord Elgin to take her instead of the younger sister so as to avoid further bloodshed. It is said that as soon as her sisters saw her leaving the Acropolis, they mourned so loud that their wails could be heard to ends of the earth.

Since that time, that lost sister resides in the British Museum in London, separated from her younger sisters, so as to always remind the Greeks that historical memory is immortal.