The myth of the heavenly Canvas

THERE WAS ONCE A PAINTER so talented that even the Gods in Olympus had learned about his skills. Apollo, the Sun God, first searched for this great painter and after carefully examining each and every of his works, gave him heavenly brushes and asked of him to paint the sky. He took a ladder, brushes and paints, and painted a blue sky with fluffy white clouds and the sun in all its glory. After finishing his work, he went to sleep in order to rest. 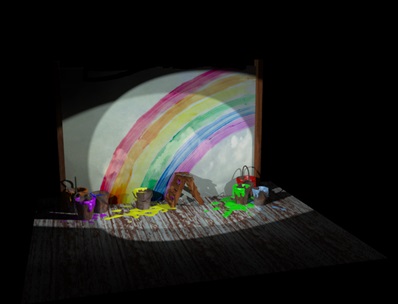 Apollo was very happy with the result, so he went over to Zeus to boast. Zeus, however, was jealous of seeing somebody else shine brighter than him, as Apollo was the Sun God and the painting was depicting the Sun in all its glory. As soon as Apollo was gone and while the painter was asleep, he asked his own servants to fill the sky with clouds. When Zeus saw the gray and black clouds they had painted, he cast his own lightnings on them so as to tear the great piece of art apart.

As soon as the painter was awake and looked at his painting, he realized what had happened. He cried and asked Zeus to forgive him for the insult. Zeus heard his prayer: tear by tear, he let them wash away the gray of the sky, until the tears flooded the painting and became rain. The rain washed away the gray completely. So as to never forget his lesson, however, Zeus never allowed the painter to restore the painting to its previous state: he gifted him paints of all colors and asked of him to draw the most beautiful thing he could imagine.

So, he prepared his brushes for a last time, and painted a magnificent rainbow on the canvas.