The Kingdom of the black-headed buntings

THE KINGDOM OF THE BLACK-HEADED BUNTINGS reached its peak around the 5th century BC. It was located in the depths of Asia, in the area that is now occupied by both Kazakhstan and Kirgizstan. 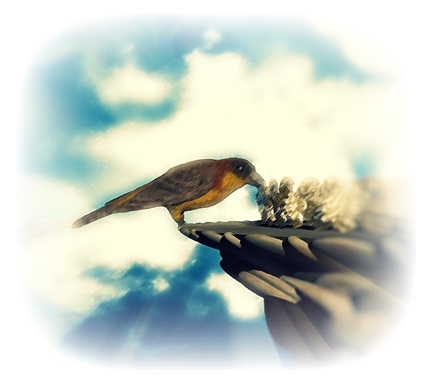 And so the tale goes: back in the 8th century BC, a group of black-headed buntings appeared in a village of farmers in northern India. The farmers were split: others suggested that they capture the birds to keep them company during the winter months, while others wanted to repel them. One of them, however, whose name was Mantav, was so enchanted by their singing that he followed them in the forest. The wild wind blew, forcing them to head north. Mantav then took his wife, Akansa, and his horse, and rode in their direction. A couple of months later they found themselves in a beautiful valley where the founded the 'Kingdom of the black-headed buntings', in honor of the exotic birds that led them there. The specific birds were considered sacred in that Kingdom, and every time they migrated for winter, the residents of the Kingdom awaited for their return with great anticipation.

As the centuries passed, however, they lost their respect for the buntings. One year, near the end of the 3rd century BC, the priest of the village received a message from the Gods: he prophesized that the year that the buntings would migrate and not return would be the year that would mark the end of their Kingdom. When the year came, and the last descendant of Mantav passed away without leaving any heirs, the buntings flew away. The residents tried to elect a King among them, but their discords would not allow them. So, many months passed, the months becoming years, and the Kingdom sunk into despair and anarchy, like a boat that headed straight to a storm.

One day, a powerful army reached the gates of the capital, and demanded that the residents of the Kingdom hand over their sacred birds in cages so as to be taken to their King, Alexander, in Persepolis. Unable to avoid their fate, they admitted the buntings had turned their backs on them and left their Kingdom forever. Enraged by their lack of respect towards their sacred founder, the foreign army turned their houses into rumble and burned their villages to the ground. And so, the Kingdom was lost in the past.