A myth about Meteora

THERE WAS ONCE AN INVENTOR in ancient Greece as great as the mythic Daedalus, whose name is lost forever in history. This inventor, a chosen of the great God Aeolus, had created a machine so strange that could make everybody fly as high as the sky, by making use of the power of the winds. 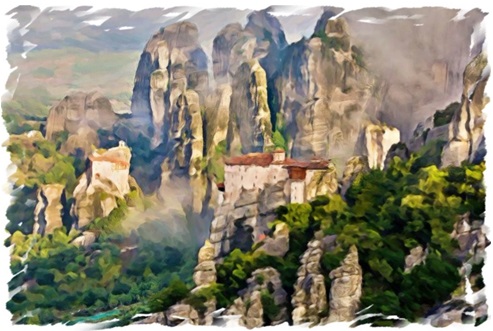 So, one day, wanting to prove his machine’s superiority, he gathered everybody around a huge boulder that was positioned in the foothills of Mount Olympus. After moving his machine to its highest point he then pulled the lever that turned it on. Powerful winds soon started to blow in the direction of the machine which lifted the boulder high in the air, along with its inventor.

The spectators that had gathered were left speechless. The more the wind blew, the higher the boulder propelled in the sky. But as the winds grew even more powerful, trees and house roofs were uprooted, while the animals and the humans in the area found it extremely difficult not to be swept along, and hang from whatever they could find to save themselves.

"Somebody stop him", they shouted from below. The higher the boulder flew in the air, however, the more the inventor boasted about his achievement and enjoyed his success. "I will soon reach the Gods of Olympus themselves", he arrogantly proclaimed from above.

As soon as Zeus heard it from his palace in the top of the mountain, he cast his ferocious lightning bolt on the boulder, tearing it into pieces that stuck deep into the earth, were they can be found to this day in the lands of Thessaly in Greece, best known as 'Meteora'.