On the origin of Karagöz

VARIOUS DIFFERENT THEORIES have been supported regarding the origin of the popular shadow-theater figure of Karagöz. The scope of this article is to examine the theory that supports the Ottoman origin of the character.

Popular tradition claims that both Karagöz and Hacivat were real people, and that they probably lived in 14th Century Bursa in Minor Asia. They undertook the construction of a seraglio for the great Sultan Orhan, with Karagöz  assuming the role of the chief architect. As they both had an incredible sense of humor, their builders would spend their time listening to their jokes rather than work hard to get the palace finished on time. 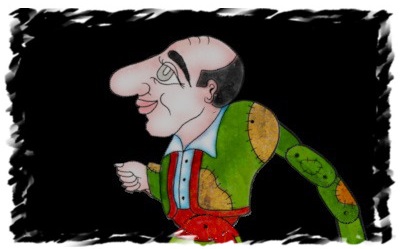 When the Sultan heard the cause of their procrastination, he went mad with rage. So, he summoned Hacivat and threatened him with a penalty of death. Cunning as he was, he blamed Karagöz, who made a bad habit out of joking during work time. The Sultan then punished Karagöz by putting him to death.

When the rumor spread around Bursa, Hacivat took a piece of white cloth and fastened it on two planks. After properly lighting the stage, he carved two shadow theatre figurers and entertained the crowd by giving the first shadow theatre play in the history of the Ottoman Empire. Soon the word reached the Sultan again, who, to make up for his misdeed, gave Hacivat permission to continue giving shadow - theatre plays in other cities in his dominion. He also erected a monument in Karagöz's memory, one which stands to this day.

A less documented version claims that Karagöz was a subject of the Ottoman Empire who approached the Sultan to ask for a favor. Instead of directly expressing his protest for the corruption of the Sultan's most trusted advisors, he chose to put on a shadow - theatre play that would pass the message to his ruler. So impressed was the Sultan that he promoted Karagöz to the position of Grand Vizier, demoting his corrupt dignitaries that inspired him with the story of the play.

Historical records place the first shadow - theatre play in the Ottoman Empire at the time of Sultan Selim I, shortly after he annexed Egypt in 1517 A.D. This, however, contrasts the claims made by the explorer Evliya Çelebi, who places the first play around a more fitting date in 1402 A.D under the Sultanate of Bayezid I, a time when Ottoman identity and culture were still taking shape.