Aesop and the myths

THE ORIGIN OF MODERN FAIRY TALE can be traced back to the times of Ancient Greece, when the name of Aesop, possibly a slave who lived in the 6th century B.C. in the island of Samos, became connected with a series of clever stories and narrations with strong moral teachings. 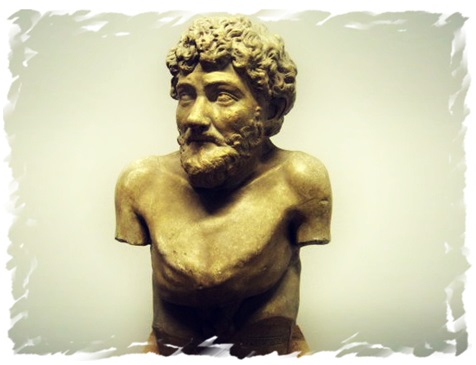 Aesop's fables are a collection of short stories that are attributed to the great storyteller, which have lived to this day and have saturated all aspects of modern fiction with their elements. The stories are short and simple, written in a plain language that even an illiterate person would have no trouble understanding, at a time were literature was dominated by verse. The main characteristic is the strong moral that each story contains, which is showcased by the actions of the protagonists.

Whether Aesop was a historical figure or not is often the subject of dispute. Some theories suggest that he was not Greek but rather of Ethiopian origin, whereas Aristotle claims that he was born in 620 B.C. not in Samos, but rather in Thrace, and only moved to Samos later on. It is a matter of fact that a large number of historiographers place his activity in the then 'Greek world' and we often take this for granted.

Aesop was rumored to have been ugly, with many physical deficiencies and problems in articulation. His gift for making up stories with striking moral lessons, however, was so great that what he lacked in appearance was of little importance. He was an extremely skilled narrator, using all sorts of literary devices and allegories to give meaning to his myths: from the cunning fox and the fearless lion, to the naive human and the clever rat, his stories are full of symbols and truths about human nature. Their main feature is anthropomorphism: animals think and act the same way as humans. The listener would therefore find it hard not to identify with their mishaps.

It is also said that Aesop did not pen his fables by himself, but that he rather collected them from the Greeks and the other peoples that inhabited Minor Asia at the time. If this is the case he is not rather to be remembered as their author, but instead as their collector who shaped them with extra elements of his choice. In any case, his stories were so popular in the Ancient Greek world and the times to follow, spreading from mouth to mouth, to the point where they reached our age and occupied a fitting place in the library of our global literary heritage.