HE TOOK HER LEFT HAND’S PALM AND HELD IT TIGHT with both hands. She then glanced at him with a look that was full of sweet curiosity, as if waiting for something but not really being sure about what it was. As soon as their glances met, he took a bow in front of her and kissed her hand, letting his lips taste each and every corner of her soft skin, from the fingers to the wrist.

“I didn’t bring you here without a reason”, he told her with a voice that was low and shaky, almost like a whisper, as if he didn’t want to disturb the sweet calm of the sea and the soft sound of the waves crashing against the shores. He then kept playing with the fingers of her right hand. It was as if his shape had merged with the moonlight showering him from above, allowing only the outline of his movements to be seen. She, on the other hand, with her silk dress and the moon shining like a bright halo over her head, looked as if she had come from another age, many centuries ago, when men still lived and died for romance. 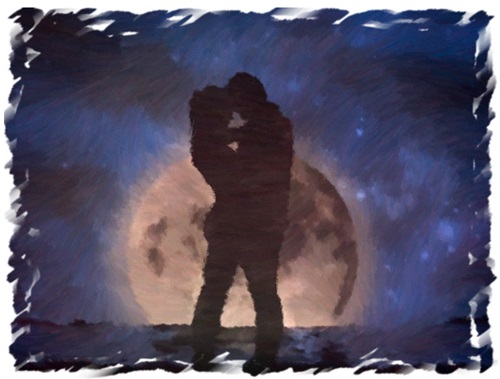 “Tell me then, what brought you here?”, she asked him, as if complaining. He, on the other hand, without uttering a single word, reached for his pocket, took out a golden ring and clenched it with his fist. He then let the rowing board aside and stood up in the boat, as if ready to bow before her, then kneeled in front of her and stood on one foot. The ring’s sparkle was enough to drive her crazy. So amazed was she by the sight even, that she let both her hands touch her face. Then, with a look that was full of surprise and her eyes bewitched by the moonlight’s reflection on the golden ring, she exclaimed: “My God it’s so beautiful!”.

She could die for romance. She had spent her whole life waiting for a Prince on a white horse, this dream-like figure that would blow her mind and conquer the depths of her imagination. She had rejected tens, if not hundreds of aspiring “lovers”, because she felt they had little to offer her from the dream she was craving. What captivated her imagination, she had realized, had more to with the way someone appeared in front of her and her ability to live the fairy tale.

“I want you to be my wife”, he told her as he passed the ring in her middle finger, “and to give me a dance in the moonlight”. With soft moves, he passed his right hand around her waist, at the same time holding her left with his own. Taking advantage of the confined space of the small boat, he offered her their first wedding dance. Her mind flooded with memories of their first tango dance back in the dance school where they first met.

They both rocked their slender bodies against the moonlight. Nothing could disturb the romantic mood of the moment, and they would have indeed kept dancing for hours, had it not been for one clumsy move of her, which made her fall in the water, soaking her long dress. He laughed at first, only to catch her by the hand and try to bring her back to the back. Then, the very last moment, and as the reflection of the moon on the water caught his attention, he felt something inside him ignite: he jumped from the boat and into the water to get soaked with her. He did it. They were both wet.

And so, with their figures showered by the moonlight, they again caressed each other by the waist and kept on their romantic dance, with their knees barely standing above the water.