The four musicians of Bremen

A MILLER ONCE FOUND HIMSELF IN BREMEN to buy a donkey that would carry the sacks to his mill. After visiting the breeder and examining all the available donkeys, he chose to bring back the most beautiful and proud of them all. To buy him, he even gave as many as fifty golden coins. The breeder took the money and to assuage his fears, he guaranteed to him that the specific donkey was the most diligent and productive of them all. 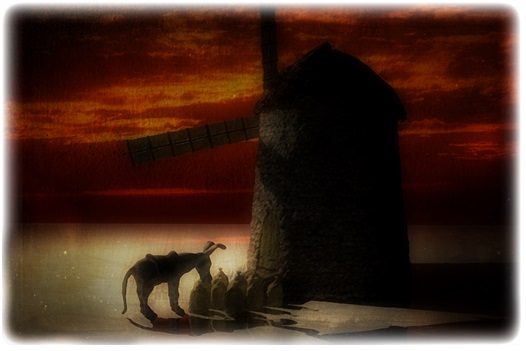 When the miller and the donkey went back to the mill, he loaded him with sacks and ordered him to take them to the storehouse. The donkey obeyed the order and did just as his master told him to. Yet as the days passed, he started complaining. At some point, and as the owner gave him new sacks to carry, he told him:

“It’s a pity that a donkey with a grace and talent as great as mine to be wasted on such trivial chores that anyone can do”.

The miller was in awe. As soon as he realized that the donkey was trying to get away with doing less, he explained to him that this was exactly the reason he had bought him, to carry the sacks of flour to the storehouse, and even threatened him that if he worked less he would stop giving him food. Unable to do otherwise, the donkey took the sacks and went to the storehouse. After a few days, however, it so happened that they donkey was constantly late, and the miller got pissed off. Things got worse with every new day: the donkey would depart with the sacks to reach the storehouse, only to come back after many hours.

One day that the donkey was late as always, the miller started suspecting him. He patiently waited for him to come back, and when he did, he asked him:

“Why are you so late today?”

“The road to the storehouse is difficult, mr Miller, and I am constantly lost”.

Not wanting to believe him, the miller thought of following him the next time. As he didn’t want the other villagers to see him following a donkey, however, he thought of getting a dog to do the job. So, he went to Bremen again, and after examining each and every dog available in the market, bought the most proud and beautiful of all. He then went back to the village and ordered the dog:

“You will follow the donkey all the way to the storehouse, and look after him so that he doesn’t get lost. If he does, come straight back to me”.

So it happened. For many days in a row, the dog followed the donkey from the Mill to the Storehouse, and the things seemed to go better. Yet after a week, they both started delaying together. One day that it had taken them many hours to return, the miller asked:

“How come you’re late, donkey? Did I not give you a dog to show you the path?”

“You’ve given me a dog, and I can now find the route to the storehouse with great ease. Yet there are mice in the Storehouse, and every time I try to get in and leave the sacks, they make my life hard. Sometimes they follow me on the way back home, and make it even more difficult for me to be on time”.

The miller got really scared, thinking that he had to get a cat to keep the mice away. He went straight to Bremen and after giving a thorough look at all the cats, he bought the one with the finest fur. Before giving her to the donkey, he explained to her:

“The donkey told me that the Storehouse is filled with mice, yet I don’t believe him. I want you to follow him in secret all the way to the Storehouse, and should you see him and the dog taking a longer route, come straight back to me and tell me everything”.

The cat agreed. So it happened. All three of them departed from the Storehouse and came back on time. The cat even assured the miller that the Storehouse was infested with mice, and the next week they all got back on time. Yet after the week had passed, they delayed again. After coming to terms with the fact that the donkey was making a fool of him and that the sacks were left behind in the mill, the miller thought of forcing the donkey to work at nights. Much to his surprise, the donkey accepted it without complaining, and so did the dog and the cat.

One morning that they were too late, the miller got irritated and as soon as he saw them return, he asked them:

“Where have you been?”

To which the donkey replied:

“We fell asleep in the Storehouse, and there was no one to wake us up. If we had a rooster, however, to do the job, we would all be back on time”.

The cat and the dog agreed.

Then the miller bought them a rooster, choosing again, the most beautiful and best-singing of them all. After bringing him back, he told the donkey:

“And now you have no more excuses to make”.

And so, the next week the donkey, the dog, the cat and the rooster returned on time initially, only to start delaying again after a few days had passed, especially in the mornings. This time the miller asked them nothing. Instead, he walked on foot to the Storehouse to see what they were up to.

As soon as he reached the storehouse, he saw the donkey placing the sacks on the ground, then entering the building along with the dog, the cat and the rooster. Only a few minutes later and loud music could be heard coming out.

The Miller was then amazed to see the donkey playing the lute, the dog hitting the drums, the cat playing the keyboard and the rooster singing. A large crowd of mice could be seen having fun with their melodies and throwing coins at the metal plate standing right in front of the music band. 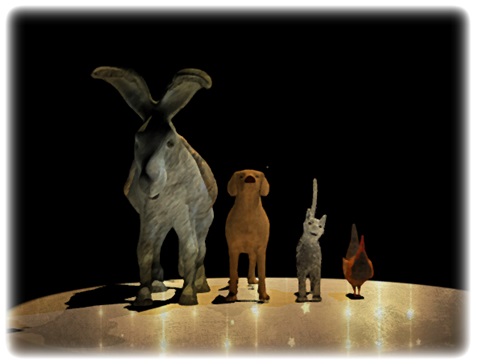 After watching the sight and having enough of it, the miller got inside the building to ask what was going on. The donkey then told him:

“My master, I can now make a living out of singing instead of carrying sacks. Come join us as well and play the guitar, and you’ll never have to work in the Mill again as well”.

So it happened. And they all lived happily ever after.