A FATHER ONCE HAD SEVEN SONS, yet he and his wife craved for a daughter. When at some point his wife got pregnant again and the child came to the world, it seemed that their wish had come true: it was a girl. However, the girl was weak and sickly, and could die any moment soon. So, they urgently had to baptize her. 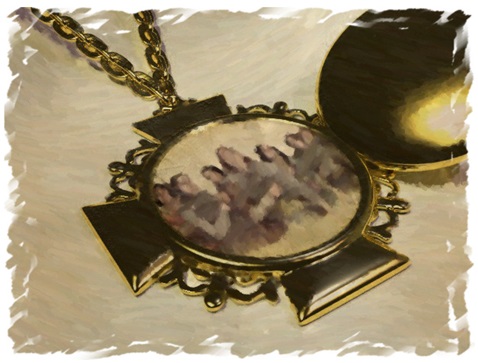 The father sent his first son to the nearest well to bring water for the baptism. He was followed by the other six sons, but as each and every one of them wanted to be the one to bring the water to their father, they quarreled. By accident, the bucket fell on the well and no one dared go back home and admit their mistake.

The father then lost his patience, thinking that his sons had disobeyed him and neglected to bring him water. Fearing the little girl would die before being baptized, he shouted in despair: "I wish for my sons to become birds and fly away".

No sooner had he finished his sentence and his sons, who had just returned home, transformed into eagles who flew over his head and then got lost in the skies above him.

His parents could not take the curse back and as sad as they were to have lost their sons, found solace in the thought that their little daughter had been saved from death. She eventually grew up and became a beautiful girl. Her parents carefully protected her from their dark secret: that she had another seven brothers which had flown away, until the day when she overheard a neighbor's words who mentioned her brother’s misfortune.

She went depressed to hear it, and went straight to her father and mother to ask whether the story was true. No longer able to keep it a secret, their parents confirmed it, blaming it on fortune instead. But as they explained what was going on, her father took out a medallion which contained an image of them, and started crying with no stop. The daughter then grabbed the medallion and went to find her brothers. Along with the medallion she took a slice of bread for her hunger and a bottle of water for her thirst.

She walked and walked, till the ends of the earth. She even reached the Sun, but found its warmth and shine unbearable. Then she went to the moon, but found it cold and lonely, to the point where she could not withstand it a moment longer.

Then she went further away, till the stars themselves, which told her where to look for what she wanted to find: she would have to reach the highest peaks where her brothers, the eagles, frequented. They told her that in order to meet them, she would have to find the spring of the river where they drank water from.

So, it happened. The daughter went down from the stars, then travelled and travelled till the pediments of the highest mountain. She climbed it, until she finally found the river spring. She then filled her bottle with water and drunk.

Seven strong eagles then flew above her: it was her brothers who had even forgotten they ever had a human form. She took the medallion out, and showed them their picture.

Seeing the image with their father, the seven eagles reached out for her hand to devour the medallion. "I want you to become my brothers again", said the daughter and let the medallion drown in the river. The eagles swam to catch it, but as soon as they saw the reflection of their true form in the water, their shape shifted back to human again.

One after another, they fell in the river, and their father's curse was washed away. As soon as the last one came out of the water the older son took the medallion out of the water and wore it. Then they all hugged and let the stars lead them back to their parents, who greeted them with tears in their eyes. So, they lived happily ever after.