ONCE UPON A TIME a lonely and ugly witch lived in Castle in the middle of a dark forest with thick trees. As she couldn’t stand her ugliness, she used to transform herself into a cat or hawk at day, and shift her shape back to normal at night when it was anyways dark and she couldn’t see. She even had a mirror in her room, the only one she could stand to observe, thanks to the fact that it distorted her image and made her look beautiful instead. And so, she lived alone, and should an animal or some bird come close, she would capture it and then take it. If some beautiful girl, however, happened to pass by the Castle, the old witch would transform her into a black bird and lock her in a cage. So great was her malice, even, that in the corridors and stairs of the Castle she had gathered seven thousand cages with all sorts of rare species of black birds. 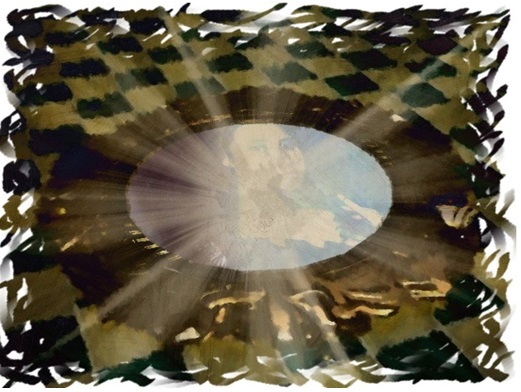 About that time there also was a good-hearted girl whose name was Jorinde, and who was more beautiful than all the other girls. She was in love with a beautiful lad who was called Joringel, and with whom they were engaged. So much did they want to be together, that one afternoon they decided to take a walk in the nearby forest. “Be careful”, Joringel told her, “not to get too close to the Castle”. It was a lovely afternoon with the rays of the Sun passing through the tree branches and falling on the bright green leaves that were covering the forest ground.

When at some point the Sun set, however, the couple got lost in the forest. They looked around, only to get even more confused, as they didn’t remember the way back. The Sun was still behind the Mountain when Jorinde looked between the trees and realized the Castle’s walls were just behind them. Then, she felt her heart fill with fear, and transformed into an ugly crow.

An owl with bright eyes then flew exactly three times above her. Joringel froze with fear and became still like a statue, unable to cry, speak, or even move his small finger. Then the sun set, and the owl flew over to a bush, and from that bush an old witch came out, who had white, wrinkled skin, a crooked nose and red eyes. She murmured to herself, raised her hand and ordered the crow to come over. Just before leaving, she took a glimpse at Joringel, telling him: “Goodnight, young lad. When the moonlight touches your eyes, you’re free to go”.

After she turned her back on him, he was free. He fell on her knees and begged her to give him his Joringel back, yet she resisted, telling him he would never have her back. She walked away, yet he followed her and kept begging her with tears in his eyes, until he finally saw her disappear in the darkness. “What will become of me without my Jorinde?”, he thought and cried all night, never to stop even for a moment, until the next morning came.

He wandered till he found a strange village, where he kept himself busy for a long time as a shepherd. He even approached the Castle with his sheep many times, never to get close enough. One night, however, he dreamt that he was in the Castle, which was filled with birds’ cages. When he entered the witch’s room and looked at his reflection in the mirror, he realized the mirror was making him look better than in reality. When the witch walked in the room and saw him looking at her mirror, she got jealous and angry and threw the mirror down, turning it into a thousand small pieces. All the birds around him then became girls, like before, and he found his beloved Jorinde among them. When he woke up, however, and realized that all this was nothing but a dream which he had seen in his sleep.

The morning that he got up, he went to the village and looked for a blacksmith that could forge mirrors. He gave him all his sheep and in exchange asked him to build a mirror that would show others uglier than they truly were. The blacksmith worked for eight nights and eight days straight, until he finally delivered the special mirror which was completely useless to any regular human being.

Joringel then took the mirror and stared at his reflection, which looked ugly and disgusting. After getting used to it, he took the road to the Castle, never to lift his sight from the mirror not even for a single moment. He walked till he reached the gate, where he stood to enjoy the sounds of the birds, then opened the big door and walked in the corridors which were filled with black birds. In the end, he found Jorinde, who was transformed in a venom-spitting black crow. He walked past her without realizing.

Joringel headed to the main hall, in which the witch along with seven thousand cages were to be found, each one with a black bird imprisoned. When she saw him, she looked at him with her red eyes, yet instead of freezing with fear, he approached her and placed the mirror right in front of her. As soon as she looked at her reflection, she got mad that the mirror was showing her uglier than ever before and burst into tears. Then she ran to her own mirror.

Joringel grabbed the mirror and threw it on the floor, turning it into a thousand pieces. Then all the black birds became girls again, and Joringel found his Jorinde, who hugged him. The old witch lost her ability to cast spells, and the Castle turned into a barn. And so, they got rid of her malice.

Joringel returned home along with Jorinde, and so they lived happily till they got very old.