THERE WAS ONCE A KING who was fair and wise, and who had a cunning cat in his Palace to keep him company.

The cat, who was very poor, one day fell in love with one of the daughters of the King, whom she wanted to marry. Not having any belongings of her own, however, she got very troubled as to what to offer for her hand. 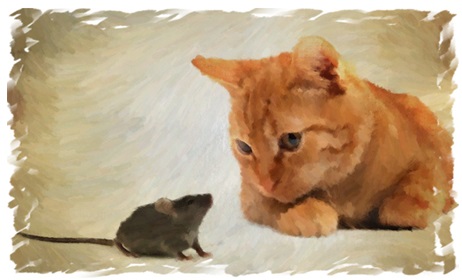 So, he thought of asking a favor from a mouse that frequented the palace's kitchen looking for cheese. The cat agreed to open a small hole in the storeroom's room, so that the mouse could sneak out a small peach and some corn. The cat would then offer the peach to the King for his daughter’s hand, whereas the mouse would be paid with the corn. So it happened.

The next day the cat appeared in front of his beloved fiancée, offered her the peach, and asked the King for her hand. As he was madly in love with the young Princess, however, and had forgotten to close the hole in the storeroom, when the month came to a closure and he had to present a report of the supplies, he was shocked to find that a large quantity of peaches and bags of corn were missing. The King, furious, blamed the cat for this terrible misfortune.

When the next day the guards caught the mouse red-handed, he blamed the cat for allowing him to sneak into the storage room from the hole in the rooftop. So mad was the cat to hear the accusation, that he started running after the mouse in the palace. And so, the King in his turn ordered them both kicked out of the palace for good.

Since that time, and every time a cat sees a mouse, she runs after it to teach it a lesson.