How the Sahara became a desert

A LONG TIME AGO THE LANDS where the great Sahara Desert is to be found today used to be covered by green valleys and beautiful lakes, inhabited by all sorts of exotic animals, like hippos, elephants and giraffes. 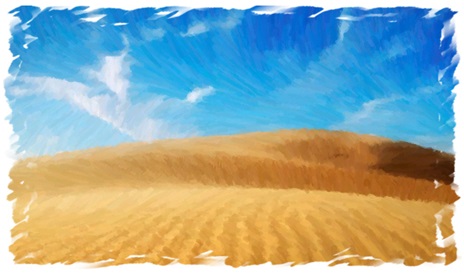 In those places a shepherd by the name of Atlas was to be found, who was very rich and had huge gardens with trees filled with golden apples in his possession. The queen of the Gods, Hera, however, had given him a very strict warning that no mortal was allowed to eat them, or even get to touch them, as he would become immortal, like him. So strong was this Titan, Atlas, that the Gods had even entrusted him with carrying the weight of the earth, in the shape of a huge rock that he should never drop from his back.

One day, however, the great hero Perseus appeared in his gardens, and asked Atlas to accommodate him for the night. As soon as Atlas learned he was the son of Zeus, he became suspicious and thought the young traveler would want to steal his golden apples. So, he sent him away, and young Perseus punished him by showing him the head of the Medusa he had killed in his previous travels. As soon as the Medusa's eyes were fixed on Atlas, he turned to stone and became the huge mountain range that we now call 'Atlas' and which located in North Africa. Along with him, the whole animal and plant world turned into stone as well, and also the gurgling water, without which the green valleys soon went dry and turned into the desert we all know today as Sahara.

Rumor has it that every time the Titan sneezes, his sneeze is so loud that can even send the dust of the desert as far as Italy and Greece.