How the wolf separated from the dog

THERE WAS ONCE A KING who was very cunning. He had many servants and guards, but most of them were neither capable nor loyal, so the King had little trust in them. 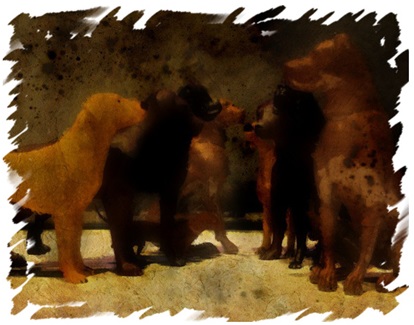 Back in those days the dog was still untamed and wild. Dogs would live in the same packs as their cousins, the wolves, and hunt together with them to the point that there was no distinction as to who was what. One day that the King was walking in the forest, he observed that these animals had fine hair, they were sturdy and quick and moved with grace. They would make excellent guards for his Castle, he thought, and came up with a plan to tame them.

So, he sent to the leader of the dogs and the wolves a messenger, with the aim of inviting them to his son's wedding. They accepted the proposal with enthusiasm and considered it a great honor, then gathered and made their way to the Castle.

Half-way through, however, a bird that knew of the King's moves, told them: "Do not go, as the King is jealous of your fine hair, and wants to take you as guards for his Palace".

Those animals that were gentle and loyal by nature thought it would be an insult to not attend the wedding. Those of them however that were cunning and wild paid heed to the bird's warning and returned to the woods, fearing the King meant to do them harm.

As soon as the King saw the pack coming to his wedding, he ordered the dogs captured. The poor animals started weeping and howling, seeing that their trust had been betrayed. The King then, realizing that his word would bear little weight should he keep them hostage, asked from each and every one of his subjects to take a dog under their wing and treat them as a friend.

Those dogs that heard the bird came back to the woods where they evolved into the wolf we know today, never to trust a human ever again. The rest were tamed and became man's best friend.