It’s 3876 A.D. The rats have managed to evolve their species to such a great extent that they eventually dominated cats, built flashy spaceships with which they colonized planet Mars and found a big Mousecity to call their home. Only mice are allowed there, along with white cats which are considered the mouse’s best friend, as apart from offering their company, they are useful in doing all the hard, manual work that mice won’t. Any other color of cat, however, is considered wild and untamed, and is therefore strictly forbidden in Mousecity.

ONCE UPON A TIME, in a Mousecity on planet Mars, there lived a white cat, Beatrice, who would soon bring to the world many small kittens. She waited for the big day with great trepidation, and her cat husband, Fluffy, worked many hours to make ends meet in a local fast food chain. The very few hours they met, they planned for the future. They had even chosen the school they would send their children, as well as the names they would give them. 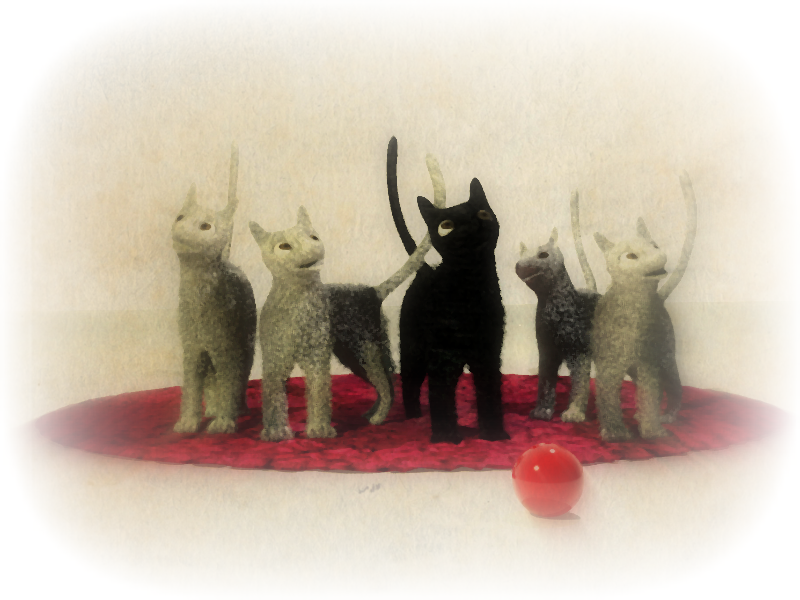 When the big day came, mama mouse Beatrice gave birth to four beautiful small kittens: Frosty, Icy, Marilyn, as well as… Smokey, who was mysteriously born with a black fur. Fluffy was excited on one hand, and shocked on the other. Smokey looked so much like him, and was so beautiful, yet his black fur was enough to bring them great trouble. Surely his boss in the local fast food chain that he worked, Jeremiah the mouse, would be very unhappy with the news.

As soon as they got back from the hospital, grandpa Tobias explained to them that it was possible for two white cats to give birth to a cat with a black fur, if only there was an ancestor in the genealogical tree with a similar color. He was also able to recall the cases of two such ancestors who had a black fur and were left behind on earth. He furthermore explained to Beatrice and Fluffy that black cats should not be considered violent or wild in relation to the white ones, as they belong to the same race. His words were enough to calm little Smokey’s parents down, yet the news started spreading like wildfire and soon enough Fluffy was met with unpleasant news. His boss, Jeremiah the mouse, wanting to safeguard his dignity, sent Fluffy to the courtyard and made it known to the authorities that… a black cat was born in Mousecity.

A crowd of mice and white cats appeared on the court room that day, either out of curiosity or just to be reassured that the black cat that was born amongst them would not pose a danger. First the mouse mayor addressed the judge and reminded him of all the terrible things the mice had suffered on earth due to the presence of black cats.

The court’s decision was very strict: the mice could tolerate the presence of white cats in Mousecity, but under no circumstances could they tolerate the presence of a black cat, who would pose a danger as soon as she grew up and would surely be unable to control her barbaric nature. So, they led young Smokey to a very special, isolated room that was far away from his brothers and parents, imposing on him a strict restriction to only eat catfood that the guards served him. Under no circumstances should he eat a living organism or anything that could cause him to express his violent nature.

A couple of months later, a fleet of human spaceships appeared and attacked Mousecity with the intention of armed conquest. The mice got so scared that they hid in holes on the walls, whereas the white cats threw their weapons on the ground and surrendered without a single shot. As they were in panic, the mouseguards forgot to bring catfood to Smokey, who however had not realized that the city was under attack as he was in isolation.

And so, the humans marched towards the Town Hall, aiming to bring the Mousecity flag down and replacing it with one of their own. Scared as he was, the mayor locked himself in the building, waiting for some miracle to save him. And then Smokey appeared, totally unaware of what was coming to his place and heading straight to the garbage to look for fishbones.

When the humans saw him, they got so scared by the bad luck they thought he would bring them that they immediately dropped their weapons and fled the battlefield. Those on the front even shouted at those behind: “The enemy’s special forces are on us. Retreat! Out of here!”

When the mice and white cats realized what had happened, they went out of their hideouts and burst into loud laughter with the folly of humans. They then lifted the black cat in their hands and awarded to her the prize of the hero of Mousecity.

And so little Smokey with the cute black fur not only saved Mousecity but also gave the mice that had wronged him for no reason a good lesson that they remembered for the rest of their lives.