The garlic that exploded

A GARLIC once was really troubled about his natural odour. The other fruit and vegetables of the garden avoided him, as his smell was really intense and they couldn't stand around him for long. "Nobody wants me", said the garlic and he felt lonely as the days passed. He would only hang out with the cauliflower, whom others also avoided. 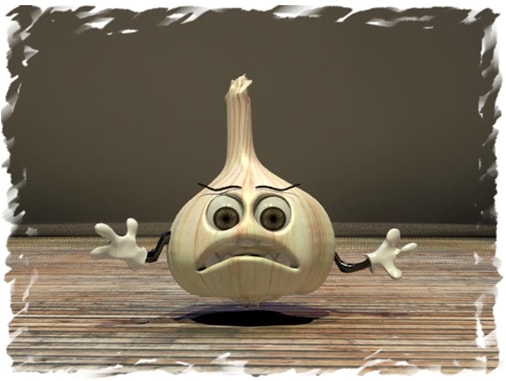 The situation got stale when one day the fruit and vegetables of the garden decided to throw a party and forgot to invite him. As soon as the garlic heard, he almost lost his sleep. "Is my smell really that bad?", he wondered.

"Maybe if we used perfumes, they didn't mind if we went", told him the cauliflower that was also sad not to have received an invitation. So they both went to nearest mall to find perfumes so as to cover their natural odor. After giving it a thorough search, they eventually found a perfume store containing all sorts of scents.

"Let me suggest this marvelous scent made of green apple and vanilla", told them a poppy flower that worked there as a salesperson, and sprayed them on the hand. As much as they didn't like it, they bought it and sprayed themselves all over.

They then showed up in the party, where the other fruit and vegetables were already having fun. As soon as they saw them, they immediately plugged their noses. After a while however, and with the fine fragrance reaching their nostrils, they were amazed and stared at their two new guests with wonder.

"It smells of... green apple!", exclaimed a tangerine, who was naturally trained to recognize smells. Soon everybody in the party, from the sourest lemon to the sweetest strawberry realized what they were up to and burst into laughter. Then however, a group of bunnies showed up, who ran towards the fruit and vegetables to devour them. They hid as they could, behind trees and stones. The only one not to hide was the garlic, who was so angry that covered his face with his hands not to see.

"The garlic is in danger!", the other fruit and vegetables shouted, seeing the bunnies running after him. He, however, was so mad at them that exploded with anger. So strong was the smell that came out that the bunnies went dizzy and retreated back to their cages.

"We are saved... or rather, the garlic saved us!", exclaimed the other fruit and vegetables as they came out of their hideouts. They then apologized to the garlic for poking fun at his natural smell, presented him with a medal and declared him the hero of the garden.

Since the time, whenever some danger appears in the garden, they reach out for the garlic to save them with his strong smell.