The myth of the dragon lily

ONCE UPON A TIME there lived a dragon in Crete who was wicked and easily devoured every living thing he found. That dragon was rumored to lived in a cave near Mount Ida, that always smelled of rotten flesh from his hundreds of victims: sheep, goats and even humans that came to challenge him. Very few people dared come close to the cave as they could not stand the stench. 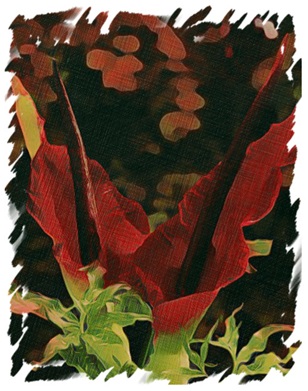 However, as the myth would have it, the daughter of Uranus and Gaia, called Rhea, gave birth to the King of the Gods, Zeus, and hid him in another cavern in the same mountain, close to the one that the dragon lived. Little Zeus was brought up in that cavern by a family of shepherds and a goat, Amaltheia, who agreed to be his foster - mother should Rhea help save her from the wolves.

As luck would have it, the dragon visited the cave were Zeus was residing, where he found him being fed by the goat. He devoured each and every one of the shepherds' sheep, but spared Zeus and the goat who ran away the very last moment. The dragon then carried the corpses back to his cave where he left them to rot.

When Rhea realized what had happened, and to punish the evil dragon, he paid him a visit in his filthy cavern and transformed him into a hideous flower; our well - known dragon lily, which has a reputation for its foul smell that is highly reminiscent of rotting flesh and that only flies can stand.