THERE WAS ONCE AN OLD MERCHANT who had three sons. His first son was known for his courage, the second for his strength, whereas the third for his cunning. “You are my lions”, the father used to call the first and second son, but for the third son, who was the cleverest, he had nothing good to say. One day, the first son went to his father, and told him: “Father, I want to travel the world. Please let me”. 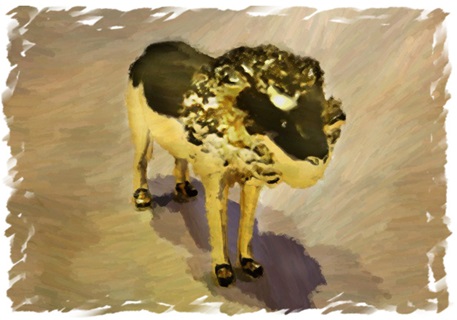 And so, the father ordered that he be given a sturdy ship. After sailing for many weeks, he eventually reached the ship of a big city. In the entrance he found a sign that read that whoever found the King’s daughter within eight days would have her as her wife. Should he fail, however, he would take his head.

“So”, thought the son, “as I am the boldest of my brothers, it shouldn’t be hard for me”. He then asked to see the King and announced to him that he would attempt to find the Princess.

“Only a true lion would be able to find my daughter”, said the King, and added: “To find her you must look in the dungeon, but remember that unless you find her within 8 days, it will cost you your head”.

No sooner had the King finished his phrase, and the first son went down the dungeon of the Palace. He searched every corner and corridor, nowhere to find the Princess. Instead, he found many locked doors and no key to unlock them. After exactly eight days had passed, the King’s soldiers went down in the dungeon to find him and take his head.

All this time, his father and two brothers had little news of him, and got worried. So, one day the second son, the strongest that is, went to his father and told him: “My father, please give me a big ship and money, so I may look for my older brother”.

And so, the father also gave him a ship, which travelled far. At some point the wild wind blew, which pushed the ship to the same port that his brother had arrived at eight days before. The son then went down from the ship and as soon as he saw the sign, realized that his brother must have lost his head searching for the Princess. Then he thought to himself: “My brother was courageous indeed, yet I am the strong one, and I will do better”. So, he appeared in front of the King, who told him:

“You might be strong, but only a true Lion can find my daughter”, then adding: “you have eight days to find her in the Dungeon, or else you will lose your head”.

And so only the third son was left, who was the most cunning of all. He went to his father and asked for a ship so that he could find his brothers. Many days later, and after the ship had crossed the sea, he arrived at the same port where he saw the sign and thought: “My brothers must have surely lost their head to find the Princess. As I’m the most cunning of all, however, I’ll surely find her”.

He then appeared in front of the King, who laughed at him, as his appearance reminded little of a Lion. He told him: “To find my daughter, one has to be strong and courageous as the Lion”, and added: “if you think you can, feel free to try, but unless you find her in eight days, you will lose your head”.

The young son found the King’s words strange, and thought: “I don’t look like a lion, as my brothers did. If they failed, I’d best not go down the Dungeon”. And so, he left the Palace.

Yet the days that followed he found no rest, constantly thinking about how he could find the Princess and win her heart. Everybody told him that all who had gone down in the Dungeon had lost their head and no one returned.

He then thought of the following trick: he asked a blacksmith to make a golden lion with crystal eyes for him, so he could get inside and see through the crystals. As soon as the blacksmith finished it, he got inside and asked his servants to present it to the King as a gift for the Princess.

The King was so impressed that he took it himself to his daughter, passing through the corridors of the Dungeon. The cunning son, who was inside the lion all the time, noted down the route so he could come back again and find the room. Yet what he saw troubled him: The King had eight golden keys, which opened eight different doors, without which no one could pass. When the King presented his daughter with the golden Lion, she got impressed and asked him to place it in the middle of the room.

As soon as he was gone, the young man spoke through the Lion’s mouth opening and told her: “My dear Princess, if you only knew how far I’ve come to find you”. The Princess got scared at first, thinking it was the lion speaking to her, yet he kept on saying: “as I am no lion, but a young man with the heart of a lion. I thought of this trick to find you in the Dungeon and ask you to be my wife”.

“Agreed”, said the daughter, “but to take me as your wife, you must ask my hand from my father, who will ask you to pass through the Dungeon”.

“This should be no problem, my Princess”, the man replied, “but I observed that to get to your room, eight different keys are needed to unlock the doors”.

“Let me give you the keys then”, the Princess replied and gave them to him.

The next day he appeared in front of the King and told him he was ready to accept the invitation. The King laughed hard, as he remembered that the last time he had come to find him, he got scared and left. After a while he agreed, however, and led him to the Dungeon. “I hope you prove yourself a Lion”, he told her.

The young man followed the exact same route the King had previously followed, using the eight different keys on the doors. Eventually, he found the Princess’ room, who welcomed him with excitement.

After a while, they both got back to the surface where they appeared in front of the King. He got both frustrated and angry, as he had believed that as no one had managed to find his way in the Dungeon until that time, he would also fail.

The young man then took a bow before the King and asked his daughter’s hand. And then the King had no choice but to agree. And so, they both got married with the King’s blessings and lived happily ever after.