The cow and the fly

THERE WAS ONCE A KING who was wise and fair, and who was rumored to be so rich and hospitable that he hosted big feasts, in which he invited all the domesticated animals. The wild ones however, the beasts, he avoided inviting, as he was afraid of them. 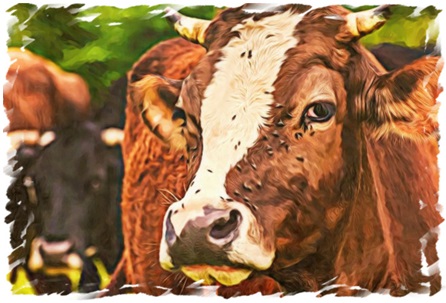 In one of those feasts it so happened that he invited so many animals that his servants had a really hard time serving. He then asked the cow to sit at the head of the table and organize the seating so as to accommodate every animal in the table. She accepted with joy, and started serving the plates, only to forget the fly, however, as she was too small and she could barely see her. So, the fly went without food, patiently waiting her turn.

Seeing that everybody had been served the first plate, the fly shouted at the cow. As she was busy, however, she ignored her: "Patience, my good friend, and your turn will come", she told her.

Yet the cow skipped the fly again while serving the second plate. When she complained, the cow again looked away. And then the third plate came, the fourth, and last but not least, the dessert. And so, the fly went to bed with an empty stomach that night.

The next day that the fly complained to the King, he decided that she was wronged by the cow, as she had given her share to the other animals. "As she looked away every time you asked her to serve you, from now on you have the right to take your share from her eyes", the King told her. Since that time, flies constantly hover the eyes of cows, searching for their share, exactly as the King ordered them to.