Myths from the Northern Countries - MoonFlake.com

A WOODCUTTER once lived in a cabin in the woods. The man was very dexterous and hard-working, traits he had inherited from his father and his grandfather, who were also woodcutters and had taught him the trade. So, every morning, as soon as the sun rose to the skies, he took his axe and went to chop firewood, which he sold to the nearby village. However, he only chopped exactly five trees, as his father and his grandfather did before him. 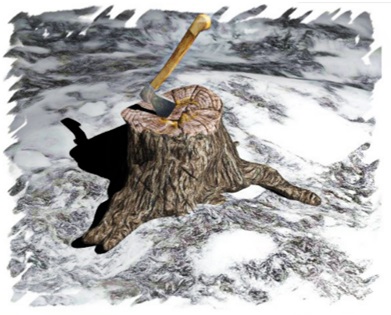 Years passed and the poor woodcutter saw others making a fortune. Feeling left behind, he thought that if he chopped more trees, he could sell more firewood and earn more money as a result. So, he grabbed his axe and went to the woods. After chopping ten trees, that is, double the amount of what he chopped before every day, he felt tired, however, and thought of quitting. He then sat on a large rock to rest for a while and catch his breath, only to be amazed at the sight of an old man who sat right in front of him, with his hands covering his face. The woodcutter asked him:

"Who are you stranger?"

"A traveler", the old man answered without uncovering his face.

"And how long do you travel?"

"Four hundred years straight? Isn't it difficult for someone to travel for so long?", the woodcutter asked.

"It would have been difficult for me", answered the old man, "if I didn't love the woods so much".

As the stranger finished his words, a violent sound was heard in the distance, like an axe cutting a tree's trunk into pieces. No sooner had the woodcutter turned his eyes back to the old man, than he saw him disappearing in a thick cloud.