Free popcorn and the home cinema

A HOME CINEMA that once lived in a household loved to watch movies with others. “With popcorn it’s even better”, he kept saying to the other appliances in the household, and every time they got together to enjoy a movie, he made sure to get supplies. 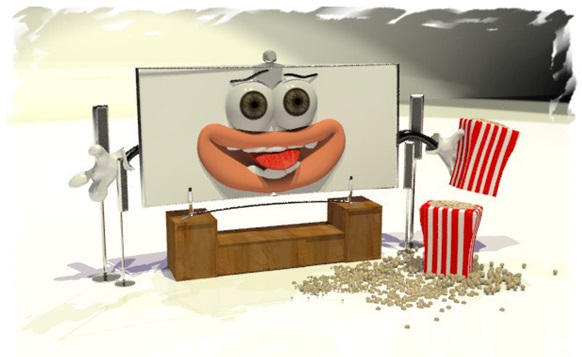 So crowded did the living room get one afternoon, that the appliances didn’t have where to sit so as to enjoy the movie. Our good home cinema thought then to split the day into different time slots so as to accommodate everyone. He would even announce the movie schedule beforehand so that, if an empty slot was to be found, the viewers would register their name in the respective sheet.

“That’s very professional of you! But in the big cinemas, popcorn is also served”, the popcorn machine told him, offering to collaborate. To seal their agreement even, she promised to give him a free bag of popcorn per movie screening.

So it happened. The first day that the plan got into motion, the home cinema arranged for two screenings: one at six in the afternoon, and one at eight. A bag filled with fresh, tasty popcorn awaited him at each and every screening, along with a crowd of excited electric appliances who couldn’t wait for their turn to see the movie. The home cinema eagerly ate the popcorn during the first screening, yet hesitated when the second round came, only to change his mind a few minutes after the movie projection started: “I should eat it, since it’s free of charge…”, he thought and devoured it.

So successful were the home screenings, that the next day even more appliances flocked to watch a movie, asking him to raise the number of screenings from two to five. “We know you like movies so much that you can’t possibly say no”, they told him, and the home cinema readily agreed. The popcorn machine rubbed her hands gleefully in the thought that she would soon be making more money than ever.

The home cinema did as they asked, and raised the number of screenings to five per day. For each and every one of them, a big bag filled with popcorn straight from the machine waited him. The home cinema eagerly ate the first bag, and then the second, only to hesitate but eventually devour the third as well.

When the time for the fourth screening came, the popcorn machine left him his popcorn bag, just as she had promised. The home cinema tried to ignore it this time, as his belly was full. Half-way through the screening, however, he changed his mind again. “It’s a pity, since it’s on the chef…”, he thought and gave in to the temptation. Only a few minutes later, and he had greedily eaten the whole bag, his belly getting swollen like a balloon.

“I’m really sorry but I cannot stay for another screening today”, he told the other appliances just before the fifth and pointed at his bloated stomach. The other appliances then got really angry, as he had promised exactly five screenings, yet the home cinema was in such discomfort that he could barely move. Seeing they persisted, he went to his room and locked himself up to get some rest, and they then started knocking on his door. After a while they simply came to terms that their good friend wouldn’t move from his bed and walked away in disappointment that he couldn’t keep his word.

As for our good home cinema? After his belly got relieved, he apologized to the other appliances and the popcorn machine for breaking their agreement, realizing that what is free of charge is not always necessary.