A BAKER ONCE HAD A DAUGHTER, whom he managed to raise against many oddities. Years passed, however, and the older he got, the more he felt the burden of providing for her was taking its toll on him. So, he thought of finding a groom for her . 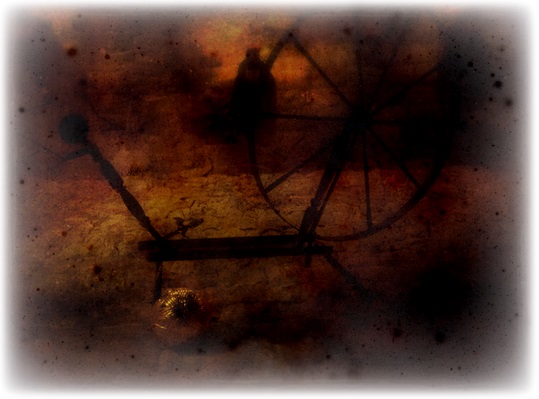 Aiming high, he presented himself in front of the King: "My King, I have a daughter that can make gold by spinning the wheel". The King got really curious. Although he immediately realized the peasant was trying to fool him, he decided to give him a chance and asked him to bring his daughter to the palace. So, it happened.

The baker brought his daughter before the King. The King was unimpressed by the girl's appearance, thinking it required far more to marry her to his son. The Prince, however, got so amazed by the girl's beauty that wanted to know more about her. So, he ordered his secret friend, a mouse, to watch over her while she was in the palace.

The King ordered his guards to lead the girl to a room which was filled with straw. He then gave her a spinning wheel, and told her:

"Go to work. Unless you have turned the straw that is in this room to gold by sunrise tomorrow, you will be executed."

And so, the girl was left alone in the room and the guards locked the door so she would not come out. Soon she got disappointed, as she had neither worked with a spinning wheel before, neither had she ever turned straw into gold or ever heard of anyone doing it. In the end, she cried. The mouse then, who was the Prince's good friend, came out from a hole in the wall and spoke to her.

"Good afternoon miss. Why are you crying?"

"My good mouse, the King wants me to spin the wheel and turn all the straw in the room to pure gold, yet I don't know how."

"Neither does the King or anybody else, my good miss. He asks others to turn straws into gold without even him knowing how".

"But the King is rich beyond all imagination. He surely knows. Have you ever seen him use the spinning wheel before?"

"I've seen many girls come to this room and cry like you. Yet no one managed to make gold out of anything in this room", the mouse explained.

Relieved that he had managed to get rid of his daughter, the baker went back home. He blew the candle and fell asleep, only to wake up a couple of hours later shaking with fear: he had dreamed that his daughter was spinning all night long, unable to make any gold out of the wheel, and the King eventually punished her. And so, the poor baker put on his clothes as quickly as possible and ran to the palace to save her, anxiously knocking on the King's door.

The King, however, didn't bother at all. "It's our deal", he told him, "that the door will not open before sunrise". And so, they both waited all night to see if the daughter would spin gold out of the wheel, until at some point the baker got mad and the guards pushed him away.

Not knowing it was her father, the daughter got very scared from the knocks on the door. She then told the mouse: "Please find a way to help me, otherwise the King will hang me".

The mouse then entered the wall through a small hole, only to come back a few minutes later carrying a bag filled with magic powder.

"The Prince sends you this. He says that as you spin the wheel, you must throw a little bit of the magic powder on the straw"

So, it happened. With the mouse's help, the daughter had made three big balls of yarn that were made of pure gold. When the door opened just a few minutes before sunrise, the King, the guards and her baker father were all left speechless. "I've never seen such a diligent and talented girl, that can spin the wheel and make gold out of it, in my whole life ", the King exclaimed.

The Prince then appeared, who kneeled before the daughter and asked to marry her before their father's surprised eyes, even putting a silver ring on her hand. They married and had many children together, never to tell anything to them about the trick with the magic powder.