The bustle of the avenue

THE BUSTLE OF THE CARS DOWN KIFISSIAS AVENUE scared him ever since he was a child. Every time the green light lit and he walked the crossing in haste, his grandma’s words telling his mother came to his mind: “never let the child unattended in Kifissias”. The same words echoed in his thoughts as he grew up, and for good reason: all sorts of accidents happened on the overcrowded street, weekly or even daily, many of which cost people their lives. Red ribbons were then tied on the lamps, and wreaths placed to always remind others of the perils of high traffic. 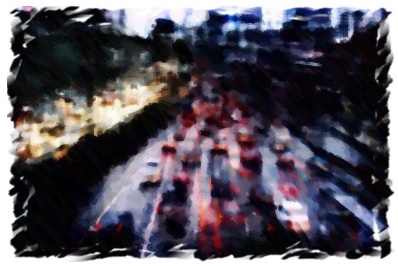 Timid and reserved as he was since his childhood, he wouldn’t even let the idea of buying a car cross his mind. So, he spent the rest of his life going from bus to bus and walking long distances in the city, sometimes with rain and cold. Until one Sunday in the summer, and as he was searching the basement in his house, he came across the bicycle with which he used to spend his afternoons as a teenager, away from his mother’s strict eyes who always discouraged him and feared that something bad could happen. Sweet memories flooded his mind. Giving it little thought, he took the bicycle outside in the street and started cycling around the square and the quiet streets around his home. So much did he enjoy it even, that he felt like a small child, at times even riding only on back wheels. He felt as if God had taken pity on him and given him wings to compensate him for all the years he had spent walking Athens on foot.

After getting used to riding around the square, he thought of taking the bicycle to the big Stadium nearby so as to have more space for movement. “Maybe I will find others to keep me company there”, he thought. Acting on impulse, he rode his bicycle again and gave it two strong spins until he reached the avenue. He then got off the bike and tried to take it across the street on foot, hurling curses at the reckless drivers that had parked so close to the pavement that he couldn’t find an opening to pass through. Seeing he wouldn’t make it, he got on the bike again and cycled down the street so as to find a suitable crossing, confident that there would only be a few cars coming his way as the avenue was usually empty during August.

Pedaling down the avenue made him feel as if he had wings on his feet. So much did he enjoy it, that after a while he found himself cycling faster and faster, developing a speed that he would hardly be able to control later on. And while there was nobody on the horizon, a car that happened to enter the avenue from a street nearby hit him with force and tore his bicycle into pieces, throwing him on the ground.

The same afternoon that he woke up in the Hospital, the doctors explained to him that he should be thankful he had no serious injuries and that he would soon be able to go back home. He, on the other hand, decided instead to move out of Athens, to some place much quieter and with less traffic…